In May a Blue Acoustic M6 system was used in the grounds of Ludlow Castle in a rather large marquee.
The interesting fact about this gig is that in previous years 12 cabs of a mass-produced brand  had been used but not with the same success we’ve been informed.

The M6 has two dual 12″ /1.4″ top cabs and two dual 18″ bass cabs.
For the weekend the rig was powered by Matrix amplification with this combination offering “amazing coverage” and “great detail” in the words of Matt Donaldson who tried the system.
Matt also engineered the weekend of bands, trios and other artsts.

The follow-up is that Matt is now purchasing the K6 version and is having it powered by the all new ModPod MPI6000 Powersoft loaded amplifier system.
There will be more on these new amplifiers soon in a separate news item.

The new Blue Acoustic K6 System is a slightly different animal to the M6 and operates in 4-way mode.
At the top is the superb BMS 4592Nd neo’ coaxial compression driver on a 60 x 40 horn coupled with two very efficient 12″ drivers in a very lightweight top cab.

We’ll bring you some static images of the new K6 and hopefully in action very soon.
In addition, a feature offering more news on the ModPods and the difference they’ll be bringing to the amplfication of small but powerful sound rigs will be published here. 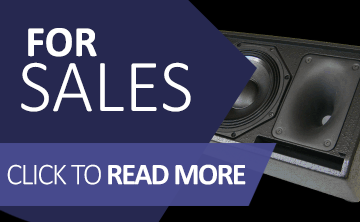 Blue Acoustic systems are designed and built in the UK using the advanced technology of British and European components from the best these regions have to offer.
Blue Acoustic is all about build quality, sound quality and attention to detail.